Commander-in-Chief of the Armed Forces of Ukraine Ruslan Khomchak: About the NATO partners advices, troop strength, use of Javelins and Bayraktars 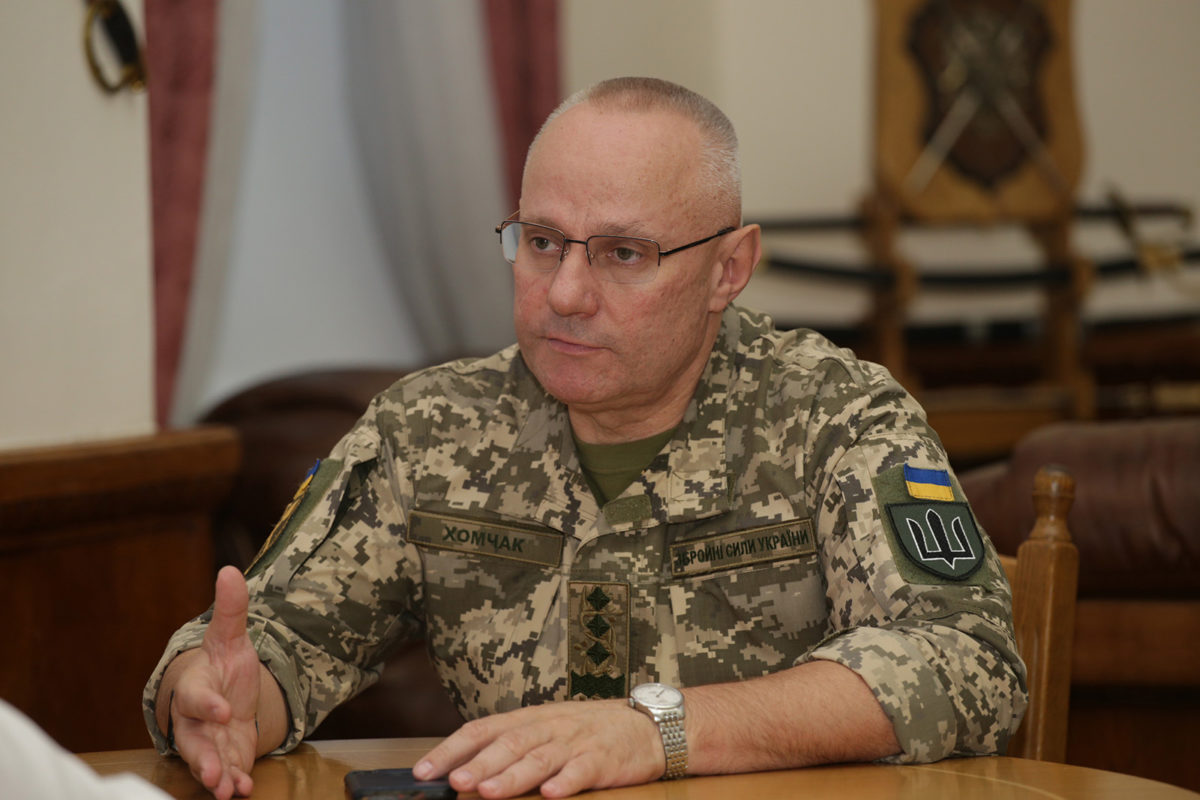 The North Atlantic Council has recognized Ukraine as a member of NATO’s Enhanced Opportunity Program. On the same day, the Ukrainian government approved the Program of Activities of the Cabinet of Ministers of Ukraine, in which it reaffirmed Ukraine’s unchanging course towards European and Euro-Atlantic integration. Participation in this Program, as well as further assistance from our foreign partners, is critical for protecting Ukraine from external aggression. What new opportunities open up for our country after such a decision of the Alliance, the ArmyInform reporter asked in an exclusive interview with the Commander-in-Chief of the Armed Forces of Ukraine, Colonel-General Ruslan Khomchak.

– NATO has recently granted Ukraine the status of a member of the Enhanced Opportunity Program. In your opinion, why is this decision of the Alliance’s leadership is made right now and in what domains can we expect a revival or even a breakthrough in cooperation with this organization in the near future?

– The decision to grant our country the status of a partner with expanded opportunities was made by the Alliance not ad libitum and not as a kind of “advance pay” for Ukraine. This decision testifies the recognition by NATO countries of significant progress of our state in reforming, the security and defense sector in particular. This is an evidence that the political and military leadership of the North Atlantic Treaty Organization views our country as a strategic and predictable partner, which aims to become a full member of the world’s most powerful collective security system. This is the result of the long and painstaking work of our military and diplomats. 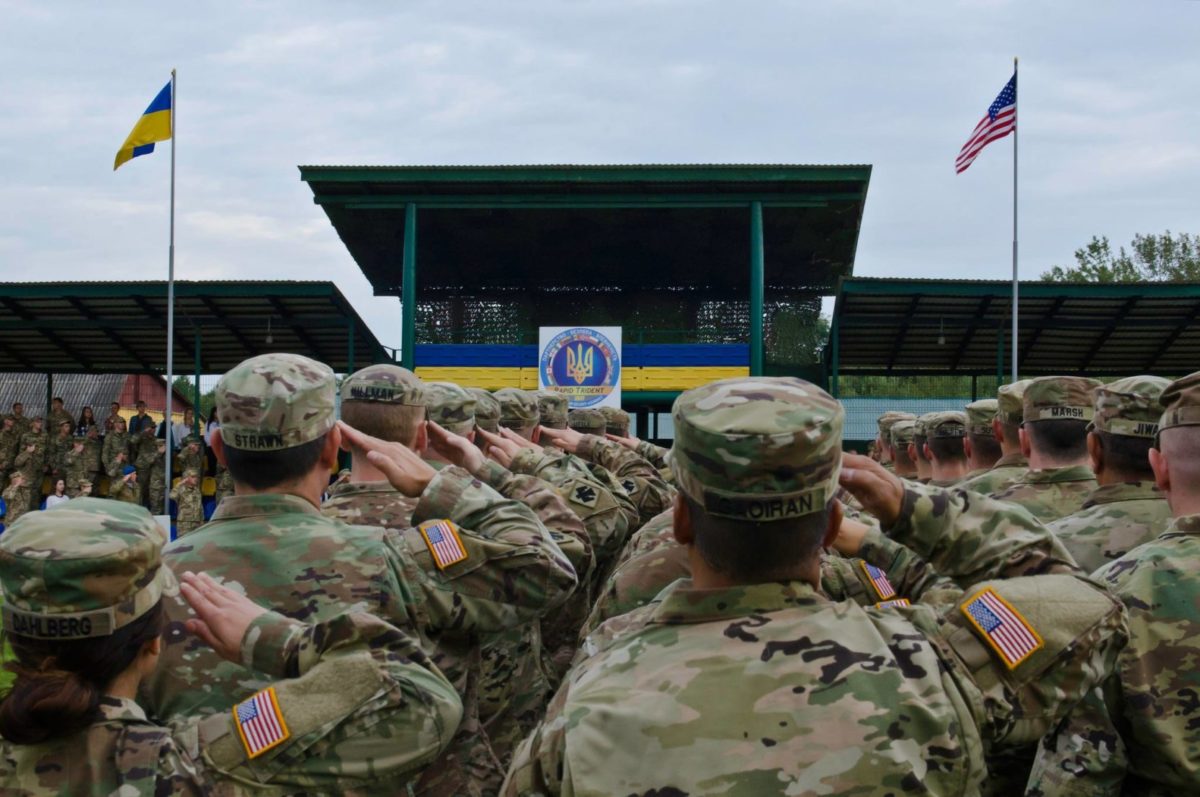 Now about the new opportunities of Ukraine. This status opens up much greater opportunities for our troops, in particular in sectoral interoperability with NATO, access to almost all Alliance exercises, intelligence sharing, enhanced cooperation in maintaining security in the Black Sea, and so on. The Armed Forces of Ukraine seek to make the most of the opportunities provided by the Program. So, there is an interest in involving crisis consultations in their early stages. We gained some experience by participating in the preparation of the Assessment of the Security Situation in the Black Sea Region last year and are ready to continue this mutually beneficial practice.

We are also interested in more intensive involvement of units of the Armed Forces of Ukraine in individual and collective training activities organized and conducted in NATO, in particular, in exercises on the subject of Article 5 of the Washington Treaty. Among other things, and according to the scenarios of collective defense and crisis response.

In addition, we are considering holding positions at Allied headquarters that will be related to more functional tasks, not just military cooperation.

I am confident that granting Ukraine the status of a member of the Enhanced Opportunity Program will be mutually beneficial for both the Alliance and Ukrainians.

– In your opinion, what is the interest of the Allies in closer cooperation with Ukraine?

– We must admit to everyone that an independent, democratic, sovereign and strong Ukraine is the key to European security. In addition, NATO officers have already borrowed heavily the combat experience from our soldiers.

“Large-scale reform of the army is our homework. No one will do our job for us.”

– What are the main results of cooperation with Allies during the Russian-Ukrainian war?

– Once again, I want to emphasize this: large-scale reform of the army is our homework. Nobody will do our job for us.

At the same time, I note the fact that partners in the armies of partner countries have made and continue to make a significant contribution to the development and strengthening of our troops. We are talking about both their comprehensive advisory assistance and large-scale long-term practical support. In the current context of repelling external aggression, the assistance of our foreign partners is crucial.

One of the aspects of this assistance is the opportunity for Ukrainian servicemen to improve their knowledge and skills, which allows them to successfully perform tasks as part of multinational military formations. After all, this is one of the important goals of defense reform in Ukraine. 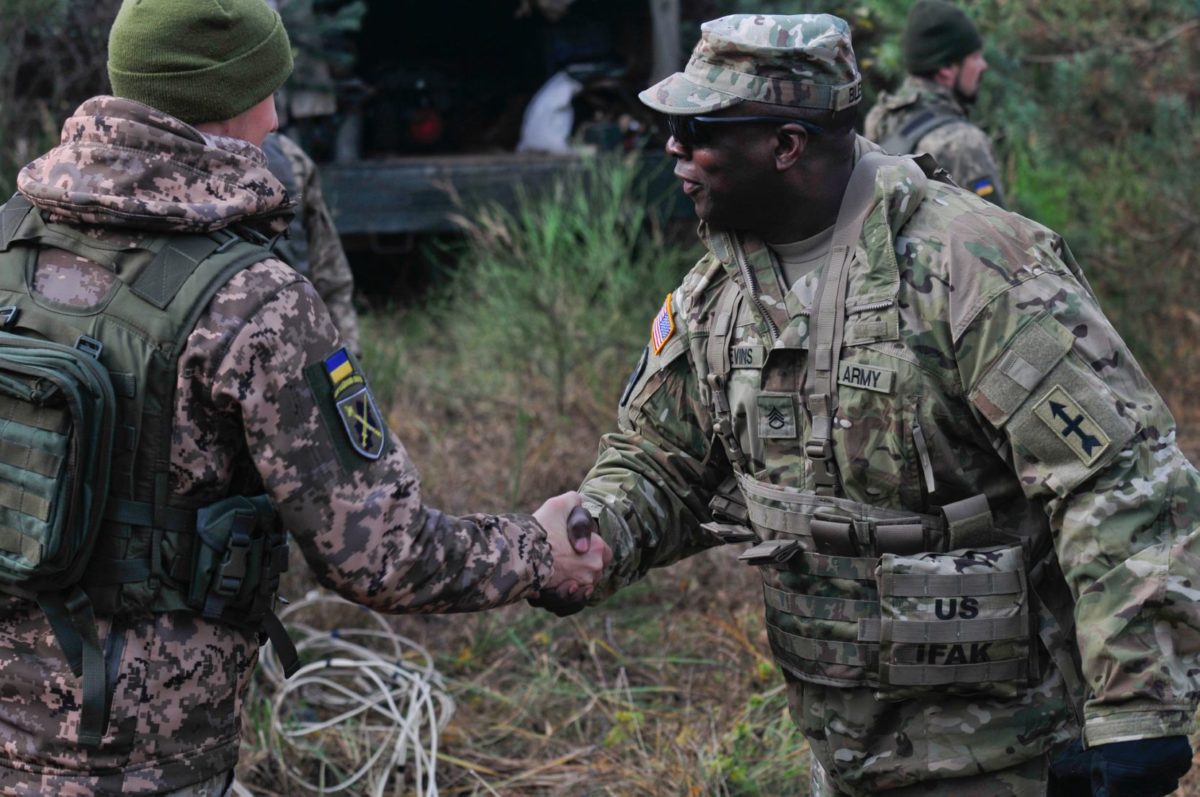 Let me remind you: training missions of the world’s leading countries have been operating in Ukraine since 2015 to increase the operational and combat capabilities of our units. Currently, four of them are deployed – American, British, Canadian and Lithuanian. Instructors from five other countries train Ukrainian troops.

Ukraine is currently the largest recipient of NATO assistance to partner countries under the Alliance’s trust funds. For example, in the period 2014-2020, we received assistance from American colleagues in the amount of more than $ 490 million.

– As for material and technical assistance to Ukraine…

–  At present, Ukraine is the largest recipient of NATO assistance to Partner countries under the Alliance’s trust funds.

I mean both the allocation of funds to the budget of funds, which are then used for the purchase of equipment for the urgent needs of the Ukrainian army, ammunition disposal, professional training, rehabilitation of wounded servicemen, and in providing large-scale advisory assistance to allies to develop conceptual foundations of the Armed Forces of Ukraine. That is why I once again express my sincere gratitude to all the allied countries that are actively helping us. 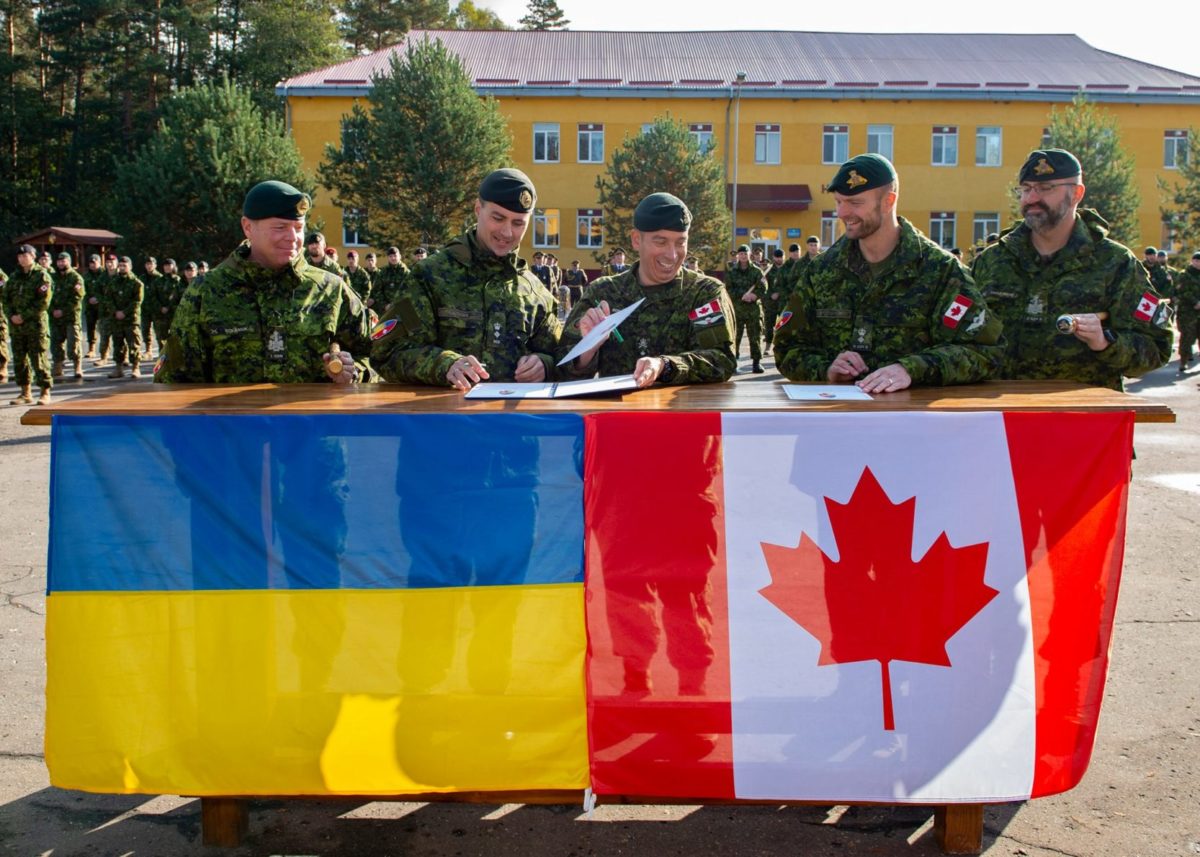 For example, in the period 2014-2020, we received assistance from our American colleagues alone in the amount of more than $ 490 million. The list of equipment provided is quite wide: from modern communications and armored vehicles to counter-sniper systems and radar stations.

In the same year, the list of equipment under US assistance includes more than 30 items. All this significantly increases our ability to deter the Russian aggressor. In addition, a new batch of modern anti-tank systems and missiles purchased by the Ministry of Defense of Ukraine was recently delivered.

This year, the list of equipment of US assistance includes more than 30 items.

“In 6 years we have learned to defend well. And the army must be trained to conduct offensive operations… “

– You mentioned the American anti-tank systems, and I immediately have questions about the readiness for their use, as well as about the Bayraktars?

– Now on the basis of one of the brigades, which is completing training at the training ground to perform tasks as part of the JFO, the tactics of Javelin usage are actively worked out. Skills of work of these ATGMs crews are developed. I personally want to make sure that our soldiers can effectively use these anti-tank systems. Now we have a much larger number of American ATGMs. By the way, as well as the number of trained crews. How many of them? Secrecy. I will only say that in the future, each of the brigades that will enter the JFO area will be reinforced by Javelins. By the way, during the training of this brigade for the next deployment, we will work out the use of Bayraktar drones with combat damage to the target. 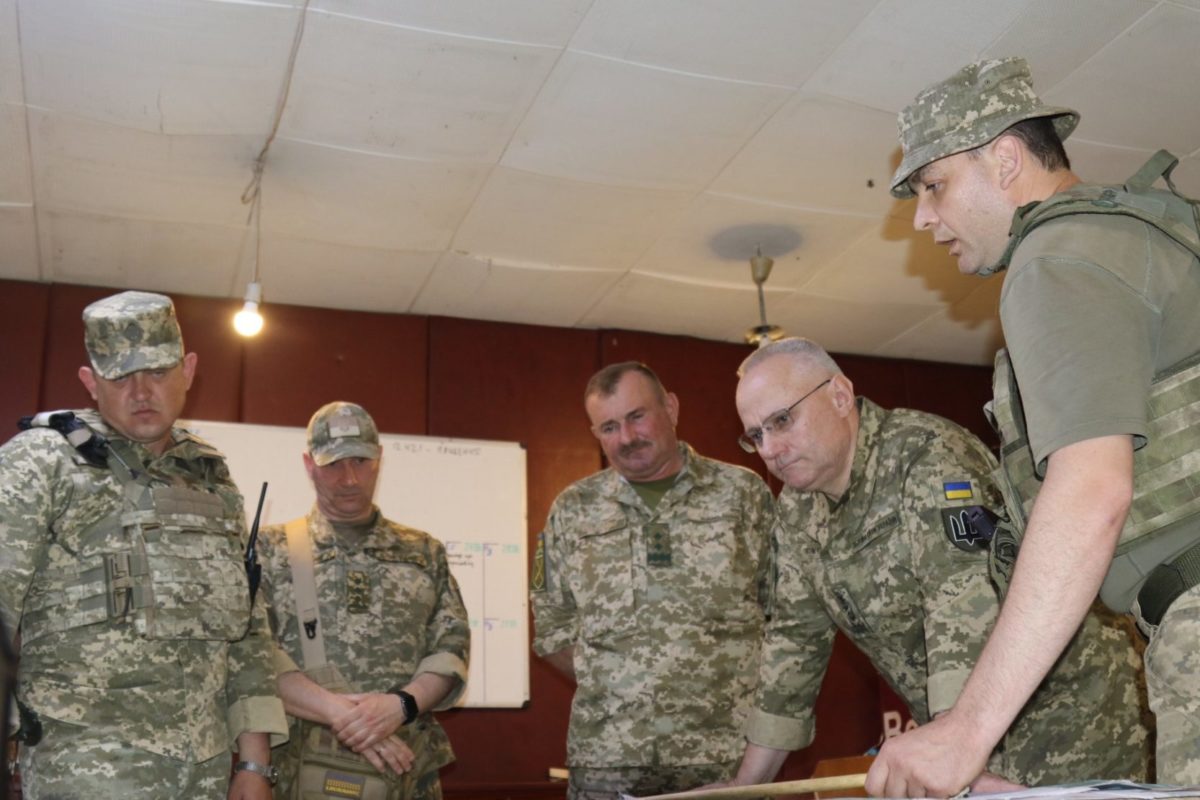 In the future, each of the brigades that will enter the JFO area will be reinforced by Javelins.

– And what other changes took place in the program of brigades training before JFO deployment?

– Today we pay much more attention and time to the training of troops for offensive operations in urban areas. In 6 years we have learned to defend ourselves well. And the army must be trained to advance in the day and the night, in all weather conditions. I set this task a year ago. After all, the army must be fully prepared for various scenarios…

– Does this mean that the liberation of the occupied part of Donbas, in your opinion, is possible not only through diplomacy?

– I am responsible for the combat effectiveness of the army, for its development, for its readiness to adequately respond to today’s challenges. Your question is a question to the leadership of the state, politicians… I will say that a lot of efforts are being made by the President, the Ukrainian diplomatic corps, our negotiators to find such arguments, to create such a configuration that the Russian Federation will leave Donbas. The progressive world continues to put pressure on the Kremlin. And this support of our foreign partners is crucial. It should be remembered that a strong army is always a serious argument in negotiations…

A strong army is always a serious argument during negotiations

But I must say that only loud declarations of readiness to move forward are not enough to win! We have repeatedly harvested the consequences of populism. Irresponsible statements often only harm both the military and society. The army must be prepared for any tasks. Professionally, in a modern way, to the seventh sweat… This requires time, resources. Today, the army is really continuing its development, technically strengthening, training according to modern programs and acquired best practices. We do not stop. Training of our units according to NATO standards continues, the Armed Forces are becoming compatible with units of Partner countries. However, I personally, as the Commander-in-Chief of the Armed Forces of Ukraine, objectively assessing the results of this work, I would like to see more progress. As well as in reforming the army and in general. We need a faster pace of reforms.

– And at what pace is the construction of a new logistics system in our army?

– As a result of the reform of the logistics system, a single body of command and control should be created, and most importantly – an effective one that will provide troops with all types of weapons, military equipment and logistic assets. Right now, I assess the reform of the military logistics system as one that is only at an early stage. Unfortunately, there are no drastic, systemic changes yet. In fact, apart from changing the sign and certain structural reformatting, I do not see any other results. It is not enough to change the names of structural units, it is important to introduce new principles of build up the supply of property to the troops. It is necessary to determine the typical model of such centers, their number, location. The main requirement for the new logistics system is efficiency. Minimum paperwork, an electronic accounting instead. Everything must be thought out to the smallest detail. A minimum of documentary work for commanders to apply for the necessary property, a minimum trucking distance, the most loaded vehicle. And not, like we have today sometimes, for two or four tires, the car is driven for several hundred kilometers. Examples of the organization of an efficient logistics system are in the armies of our partners, there are in Ukraine in many well-known companies. I set a task to significantly speed up the work on creating a modern logistics system.

Right now, I assess the reform of the military logistics system as one that is only at an early stage. Unfortunately, there are no drastic, systemic changes yet.

(The second, no less interesting and important part of our conversation with Ruslan Khomchak, you will read on ArmyInform in the near future)

The conversation was led by Dmytro ROMANIUK